At just 12 years old, Drake Sir has goals and dreams of becoming a legendary basketball player. Drake is working towards his goals with a positive and motivated mindset to get 1% better every single day. Drake and his father Joe were one of our first Dr. Dish Home customers and we connected with them a year later to hear about Drake’s progress and success. This is Drake’s story.

A year ago, after getting familiar with their brand new Dr. Dish Home machine, Joe and Drake sent us a video of them training. Check it out below!

Drake was getting up at 6am every morning and within the first week put up 4,000 shots!

A year later Drake is still getting after it in the mornings...even earlier! Joe recalls that Drake would at times set his clock an hour ahead and get up before 5am and tell his parents his clock said 5:30am. This is just one example of the dedication Drake has to get better.

Drake and his brother Liam (4th grade) used to train in their driveway with their Dad. Joe remembers chasing rebound after rebound with shots not falling. Joe knew that if the boys wanted to get to the next level they needed to put in consistent work and training.

Joe began to look into rebounding machines because he loved using one in college for training. Drake became in awe of the Dr. Dish Home machine after seeing it in a SLAM magazine. He wanted it so bad, he cut the image out and hung it above his bed as motivation. This led Joe to make a deal with the boys that if they made a habit of training at least 15 minutes a day they could get a Dr. Dish machine. 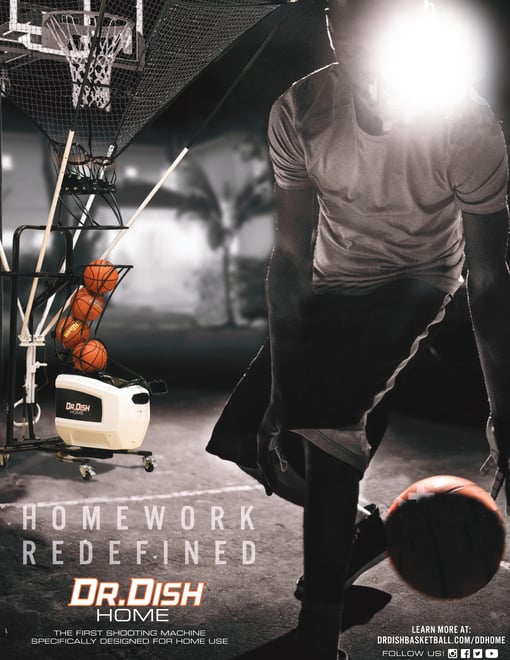 Joe recalls that, at times training was hard, lots of chasing balls, rebounds and missed shots. When we asked Drake about the challenges he has had to overcome as a basketball player in his training he said, “Improving my shot form, and misdirection moves with ball handling”.

They worked on making basketball training fun and once the boys started to see the fruits of their labor they got excited and determined to get better.  Even with these challenges, the boys stuck to their commitment of 15 minutes a day!

Taking training to the next level

Their consistent hard work led to Joe purchasing a Dr. Dish Home machine for their family. After that, Drake became best friends with the Dish. Within the first few days of having the machine, Drake put up 2,200 shots.

Drake shooting outside on the Dr. Dish Home

Drake’s improvement since having the machine is remarkable. Joe said, “Drake went from a kid who got the ball and you would think please don’t turn the ball over and would shoot with two hands to a kid who at every tournament was one of the best shooters on the court” . Drake and his brother Liam training with their Dr. Dish Home

Drake's brother Liam also pushes and motivates him to be better. Liam looks up to his older brother as a role model for training and Drake said, "I am two years older and I know I need to continue to work harder than him, he motivates me".

Drake puts in work every morning that he can. One morning Joe remembers, "he literally was shooting so much his fingers were splitting to the point where we had to super glue them". Nothing holds Drake back and he continues to push himself to be better everyday. 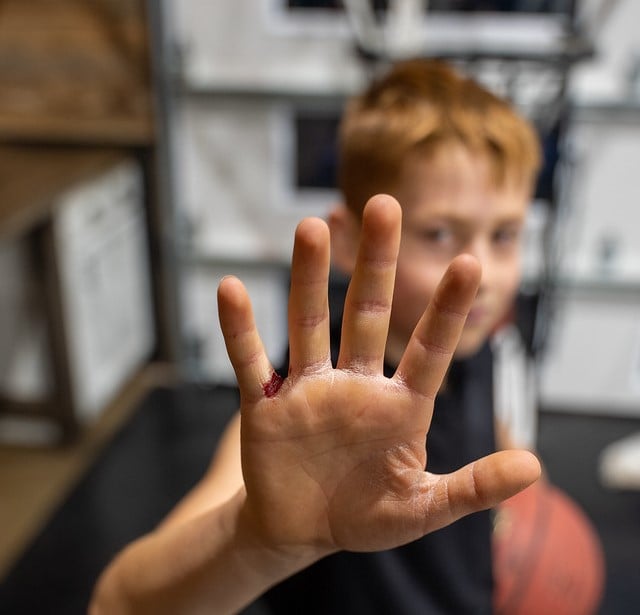 Drake's fingers split from shooting so much

Drake’s hometown has a weekly 300 shot challenge. Drake is 12 years old and competing against players ranging from junior high to high school. The shooting challenge involves:

Drake has won the challenge for 7 weeks in a row! Right behind him, is his brother Liam who took 2nd place in the challenge. One of Drake’s goals is to win every week. When asked about his favorite basketball moment Drake recalled playing on an all-star team and playing against an undefeated team in a tournament. At halftime they were down by 10 points. In the second half, the other team went into a zone defense and Drake started knocking down 3’s. Once they knew he was a shooter, they put heavier pressure on him and he kicked passes out to his teammates for shots and they were able to win the game.

Having a Dr. Dish Home machine certainly played a role in helping Drake become the player he is today but none of that would have been possible without his personal drive, determination, consistent training, and support from his Dad. 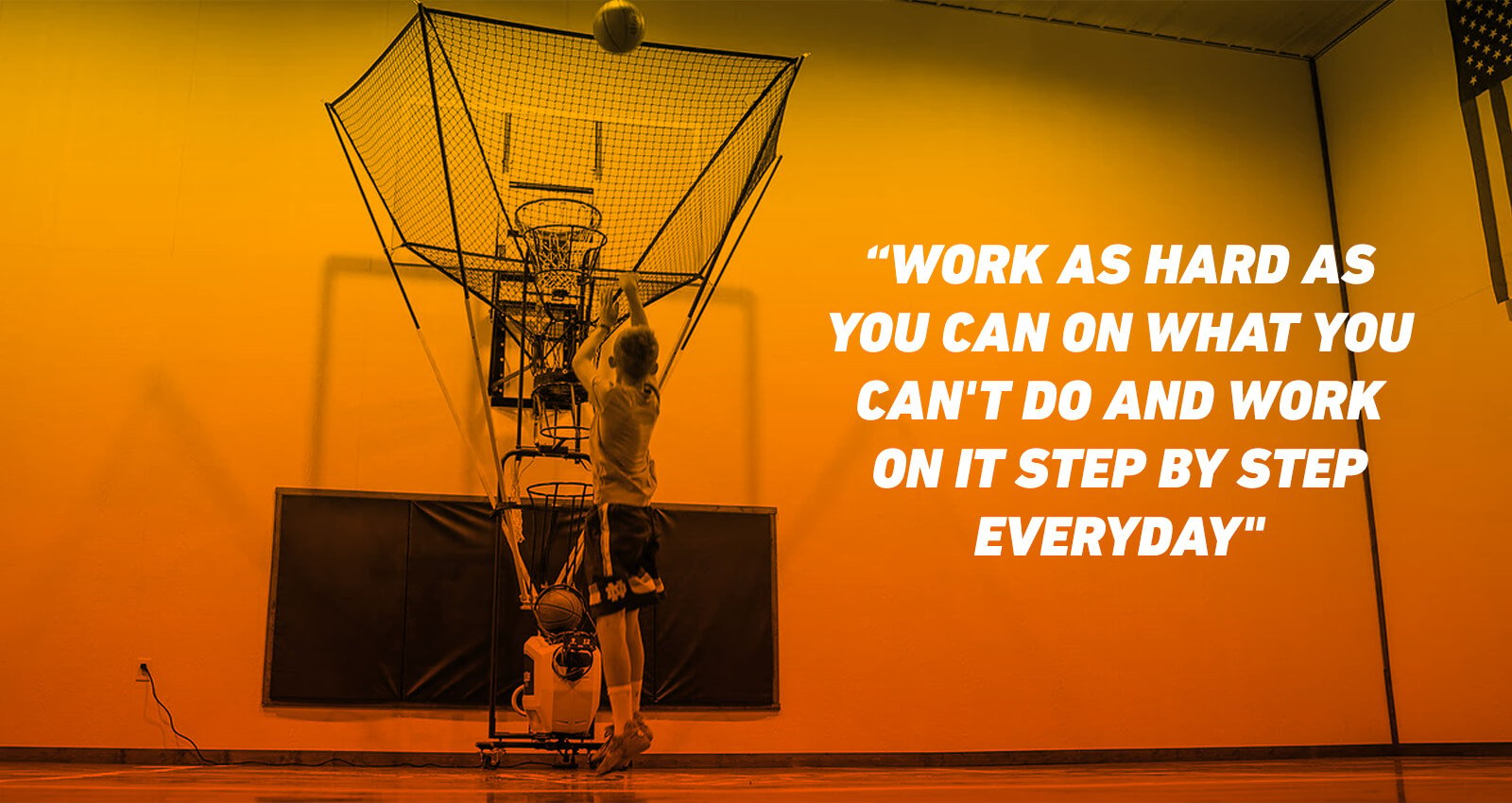 Drake shooting on the Dr. Dish Home in his home gym

Drake looks up to great basketball players as inspiration like Devin Booker, Steph Curry, and Tyler Herro.  His favorite team is the Phoenix suns and one day Drake hopes to play in the NBA and chase after breaking all kinds of basketball records!

We asked Drake what advice he would give to players who want to get 1% better everyday and he said,

Work as hard as you can on what you can't do and work on it step by step everyday."

We can't wait to see what's next for Drake and his brother Liam and look forward to following along their basketball journey.

These Stories on Dr. Dish Home